I went to San Francisco for a week and a half.

My first full day, I met with Tyler Keift, a talented developer and cofounder of Speaker Text who currently works at Facebook.  He offered to show me around the city for the day, and we started at  Blue Bottle Coffee in Mint Plaza, a place I would now recommended to anyone who enjoys coffee. Blue Bottle coffee does to the coffee bean what ice cream does to milk. I ordered the New Orleans Iced Coffee and it was awesome. Also, this particular Blue Bottle has the US’s first $20,000 coffee machine. 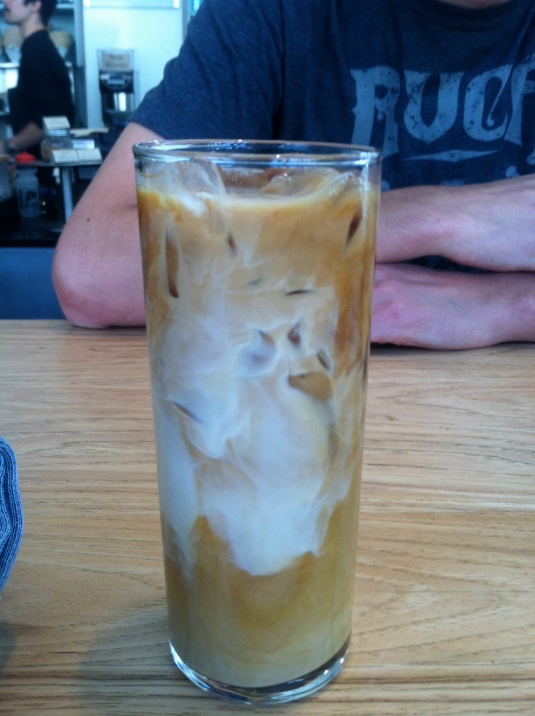 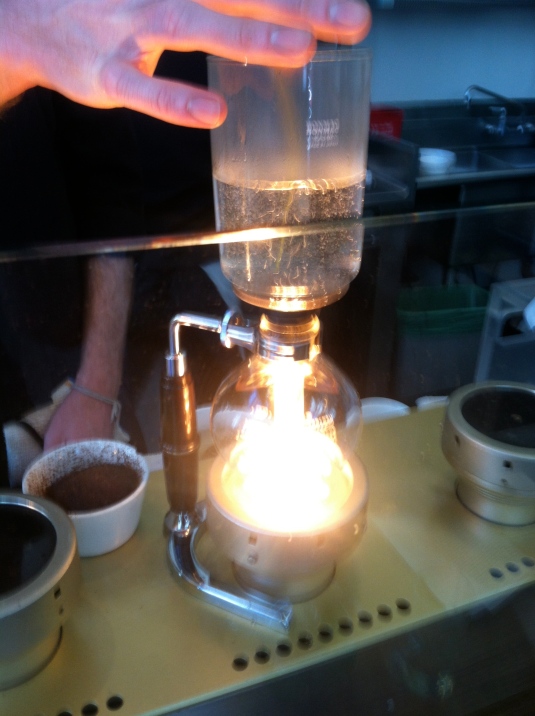 It was one of the clearest days in the city in the last two years, so we drove up to the Twin Peaks for an impressive view of the Bay.  Afterwards we drove through Golden Gate Park, which is like NYC’s Central Park, except that at the end you run into the Ocean Beach and the Pacific ocean. The beach was gorgeous, dotted with surfers and sun bathers. I was sold on SF within 24 hours. Another curious thing Tyler brought up was that there are no mosquitos in the Bay. Read that again, East Coasters. 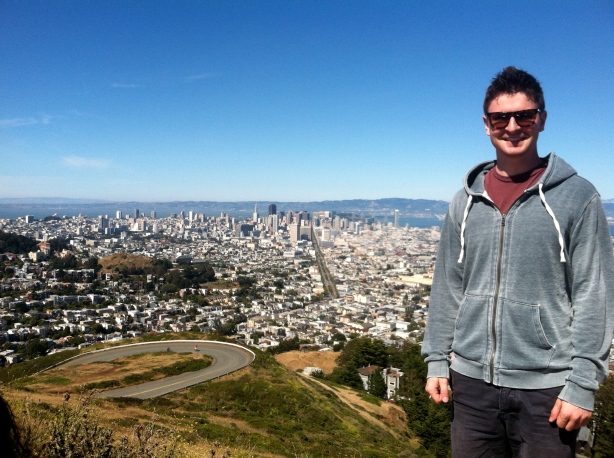 San Francisco from the Twin Peaks

I went tourist for a day and rented a bike to tour the Marina neighborhood and cross the Golden Gate Bridge. I didn’t feel like a tourist though because most of the people on the bike trail were running and riding their bikes because that’s what they do for exercise. A luxury for me is common for people who live in San Francisco. 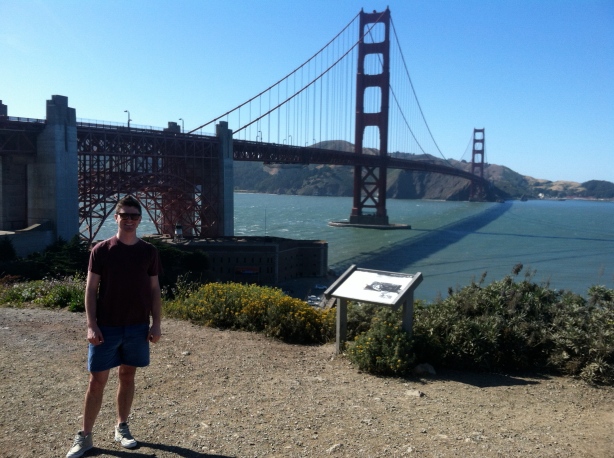 Making my way to the bridge

I stayed in a hostel, which I haven’t done since I went to Peru in 2010. A hostel is basically a frat house crossed with a hotel filled with travelers. The people you have breakfast with probably have their bags packed for the next city, never to be seen again, and the same thing will happen the next day. Despite everyone being strangers to each other, many people will open up a lot of themselves to you.

One night, I was in my room (I stayed in a room with two bunk beds) chatting with one roommate, when a new Australian roommate, a man in his late 50s, came in. He seemed a little flustered, so I asked if he was OK. He explained that his $500 glasses were just broken. I asked how and he said that his wife broke them. “Accidents happen,” I remarked and he continued to explain that she broke them on purpose, telling us about how his wife of twenty years was physically and verbally abusive, one time pulling his head back over a chair and holding a knife to his throat. He recounted other injuries he sustained defending himself from his wife and that they would be soon getting a divorce. I felt awful for him. He talked more about how they used to be totally in love and even built a house together, but over the last two years their relationship degenerated. I feel like that kind of situation only happens people are too afraid to confront the uncomfortable and make hard decisions, but you never know what people go through. It was simply a crazy story to hear from a complete stranger.

I came to San Francisco for a job interview with a company called ZeroCater. They make it easy for companies in the Bay area to get awesome lunches from local restaurants, caterers, and private chefs. The way it works is that a company tells ZeroCater that they have, for example, thirty people, two of which are vegetarians, three of which are  vegans, that they love sushi and Thai food, and they trust ZeroCater to deliver food according to their criteria. ZeroCater serves the local food community by ensuring consistent, high volume orders from local vendors while streamlining the business day. Their business model is awesome and I relate to every aspect of it: supporting local businesses, increasing productivity, and bringing people together over great food. I ultimately didn’t receive an offer, but I learned what the most important thing to focus on while preparing for an interview is: know what you can do to increase sales.

The most enjoyable parts of my trip were the conversations I had with people who actually lived in San Francisco and worked in food and sphere. Through a friend at Cornell, I connected with Matt Coelho. Matt comes from the engineering world but recently opened the brewpub with his friend Jim Woods called Cervezeria de Mateveza.  They craft beers (and sell dozens of hard to find beers) derived from yerba maté, the argentine tea infusion. The beers are phenomenal and leave you with a gentle caffeine buzz, as maté contains naturally contains caffeine and few chemical cousins of caffeine.  Each beer has about half a cup of coffee’s worth of caffeine. Maté has hundreds of years of history and culture on its own. It’s brilliant to ferment it and let it intermingle with the international culture of beer. Congrats Matt and Jim for substantially differentiating yourselves from the pack.

I sat down with Will Hauser, the founder and president of Two Degree Foods, to talk about other areas of the San Francisco food industry I could get involved in. Two Degrees Food is the flagship one for one business in food. When you buy a vegan, gluten free fruit bar from Two Degrees Food, they donate a meal to a child in the developing world.  So far, Two Degree Foods has provided for over 200 million children. In the US, it’s hard to remember or even understand that the majority of the world lives in poverty. The world could use more Wills.

Ben Midanek, founder of 4Sight Sunglasses helped me prioritize my trip and introduced me to his network in San Francisco. Ben is the first person to build a socially conscious business to help the world’s billions who need prescription glasses. When you purchase a pair of sunglasses from 4Sight, you’re sending a pair of prescription glasses to someone in the developing world. 4Sight sunglasses are hand-made in Italy and look awesome. I’ve had a pair since spring 2011. You can learn more about the people 4Sight Sunglass aids from this TED talk.

I was blind-sided by San Francisco. The people get along with each other so well. I think because most of them are truly doing what they are passionate about. To me, the enthusiasm and creativity around the local food, community, and technology is addictive. Not getting the job is a reminder that I am 23, just out of college, and I really don’t know how the world works yet.